In my last post I wrote about Fanny Lifshitz, daughter of David and Yetta. At the suggestion of Amy Cohen of   The Brotmanblog: A Family Journey  https://brotmanblog.com/   I created a simple chart to try and bring some clarity to my thoughts and help with some of the confusion.  What in the world had I been trying to say?  Simply, I believe that Fanny Lifshitz (daughter of David and Yetta) may have married a cousin named Israel Lifshitz. All we know about him from the death certificate shared in the previous post is that his father was named Benjamin Lifshitz and his mother Eva.

I contacted Debbie, another DNA found cousin who I have been corresponding with for a few years now. She has had Fanny and Israel on her family tree since we first connected. However, we had no idea how we tied in together. Up until now, we simply had a 3/4 cousin match that we believed was with our Lipshitz name and no other connecting information.

Something  clicked after the last posting – Jane realized if ‘we’ had this close DNA match and I had a close DNA match with Debbie and her mother Ann, granddaughter of Fanny, then Jane would have a match with Debbie and Ann as well. Of course, why hadn’t I thought of that already – well actually I had looked and saw the shared matches but it had not clicked. We both took a look and it all clicked. Jane, Judy, Debbie, Ann and myself all have very close cousin matches.

Jane had also shared with me when we first began this research that she believed one of Fanny’s daughters had married a Puchkoff.  Infact it was one of Fanny’s daughter’s who married George Puchkoff – daughter Esther. That is an interesting last name and one not easily forgotten, again helping to tie this all together. I feel very comfortable with the connection of Fanny as a sibling to Isaac/Ike, Simon, and my great grandfather Benjamin. 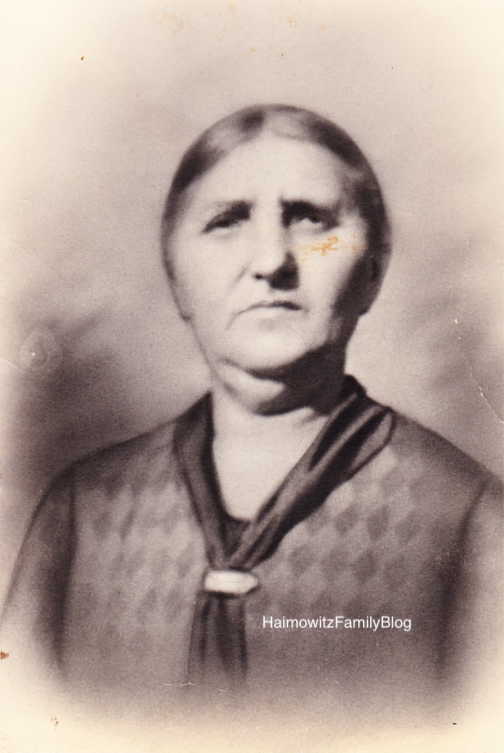 Photo Courtesy of Debbie ~ Thank you so much for allowing me to share this fantastic photo of Fanny.

Follow Branches On Our Haimowitz Family Tree on WordPress.com
Join 164 other followers