As I continue to work on my missing Haimowitz sister, I had sent away for and received the marriage certificate this past Saturday for a Meyer Gropper and Bessie Heimowitz. Leaving no stone unturned and always hoping for a clue, this certificate left me with more questions than answers but felling hopeful I may be onto something. I was hoping for a last name for Bessie’s mother on this certificate but as you can see, written for both mothers the maiden name is ‘non remember’

The question I was trying to answer with this marriage certificate was could Bessie Heimowitz be the missing sister of Samuel and Marks? 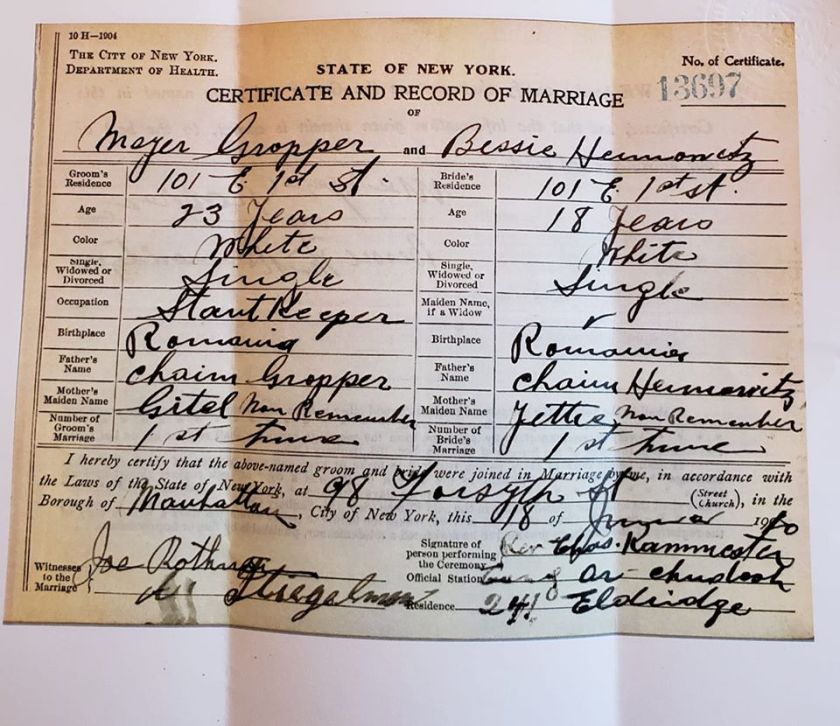 Recapping what I know: the names of the parents of the ‘missing sister’ would be ‘Hyman’ Haimowitz (as written on brother Samuels SS application) Hyman could also be spelled Chaim/Haim or any additional spelling. As reported on Samuels death certificate by his daughter Fay Lazar, she reported Hyman’s name as Herman. As for Samuels mother her name was listed as Ida Greenblatt/Grunblat, as noted on the SS application and his death certificate.

Question: Could Ida have been known as Yettie or Yetta – we don’t know that.

I turned to Ancestry and familysearch in an attempt to locate anything else that might provide some answers, like a death certificate for this Bessie Heimowitz. Identifying the correct Bessie Heimowitz proved difficult due to duplicate names and similar dates. I found an additional record under the New York Marriage ‘License Index’ and on the  license application for date May 7, 1910, Bessie’s last name was written Himowitz. Going back to her brother Samuel’s WWI draft record his last name was written Himowitz. Also, Samuels last name on the 1905 census is spelled Heimowitz as on the spelling of this marriage certificate above. These kind of spelling mistakes are very common and prove both confusing and frustrating and are no real help most of the time nor does it connect them at this point.

So we have Bessie married to Meyer Gropper which led me to a SS Application and Claims Index  for a Bessie ‘Hymowitch’, clicking on it the spouse was a Meyer Gropper for child Hyman ‘Gruber’ not spelled Gropper – this led me to a WWII draft registration on the 16 Oct. 1940, for Hyman Gruber with Gruber crossed off and rewritten Gropper. Hyman’s birth date was Jan 22, 1914, born St Louis, MO. It listed his home address as 4112 1/2 Whittier Blvd., Los Angeles with his mother Bessie Gruber at the same address.

Bessie Gropper was clearly using the name of Gruber as well and by 1940 they had relocated to the west coast.

I had not been able to find a census record for Bessie and Meyer but here I had her and son in Los Angeles and then another hint from this brought me to a 1925 census in the Bronx. I found Bessie under the spelling of Gruber with her son Hyman and a daughter Yetta living with Morris Siegel, his wife Yetta, son Hyman 19 and daughter Sarah, 12. Bessie is listed as ‘sister’ and not as sister-in-law but I suspect that was a mistake and she was sister to Yetta, Morris Siegels wife. I don’t want go off on to big of a rabbit trail on this,, but I have found enough to make me pause and wonder if Bessie could be the missing sister.  This also would mean that there is possibly an additional sister for Samuel and Marks.

I was unable to find a marriage certificate for Morris Siegel to Yetta/Yettie Haimowitz or any alternative last name spellings but in doing so I was led to a 1910 census record for Morris and “Yettie”.  Morris and Yettie were living in New Jersey, Morris was a carpenter, 30 years old, immigration from Romania in 1890, wife Yettie was 28, born Romania, son also named Hyman was 4 and daughter ‘Ida’ was 2 (known as Sarah on 1925) I am suspecting they were married prior to immigrating here. Also note the name of daughter Ida was the name we are looking for for the mother of our missing sister and here is another son named the same as Samuel and Marks father. Coincidence? Very possibly

Records and dates were very spotting but from what I can piece together, Bessie and Meyer did not remain married. If I have followed the clues correctly Meyer remarried in 1935 a Goldie Weinstein. Together they had 2 children, Micheal and Marilyn Gropper.

I did find a death record for who I believe is this Bessie for Apr 1969, Yuba City, Ca. along with a death record for Hyman/Henry Gruber/Gropper born 22 Jan 1914, St Louis, Mo death May 1977 in Los Angeles  (parents Meyer Gropper and Bessie Hymowitch)

An adoptee who found both her maternal and paternal side 18 years ago, I began digging into my new found families past. The journey has been amazing connecting and reconnecting lost and found generations. View All Posts

14 thoughts on “Update on the search for our missing Haimowitz sister ~ a possible lead.”

I would love to hear from you Cancel reply

This site uses Akismet to reduce spam. Learn how your comment data is processed.