Phillip was the brother to Pauline (Polly) and Rose/Rosie Weiss.

In this posting I am concentrating on Rosie Weiss born December 24, 1890, Romania to Samuel Leib Weiss and Mariam (Mary) Shwartz.

Rosie left Romania and immigrated to New York. I have not been able to find any immigration record for her but according to the NY 1910,1920, and 1930 census, they all report a 1903 immigration year which would make her about 13 years old when she traveled. 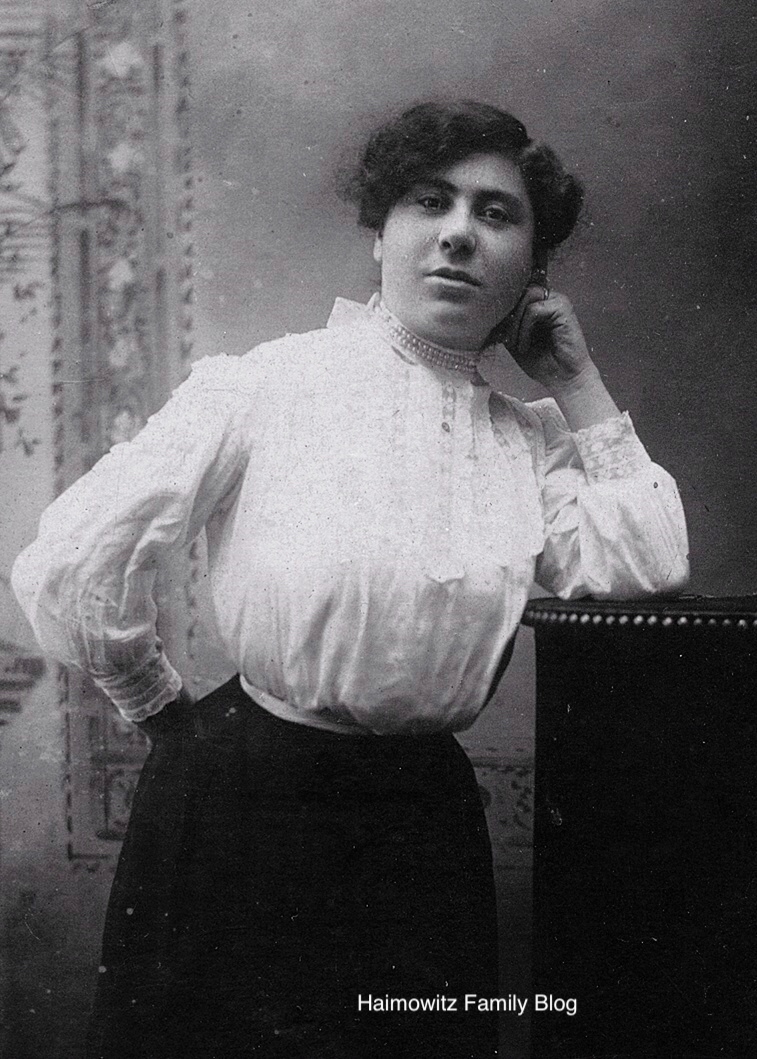 Rosie met William Levin who was born April 5, 1883, Russia. His parents were Abraham Levin and Anna Cohen. Using familysearch.com, I was able to confirm  his parents names along with his death date of June 30, 1948, buried July 1. 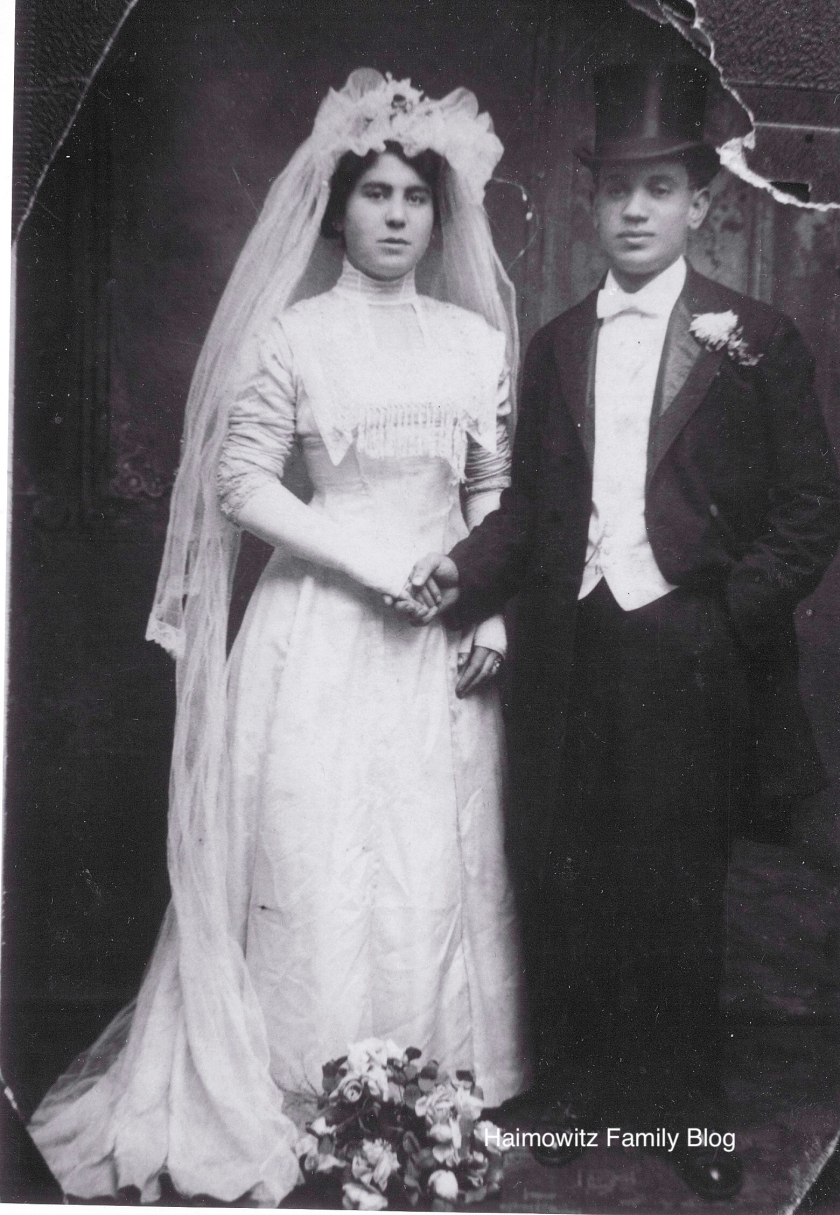 Here is another more casual photo of Rosie and William. I love her little sassy pose with her hand behind her, casually off of her hip. 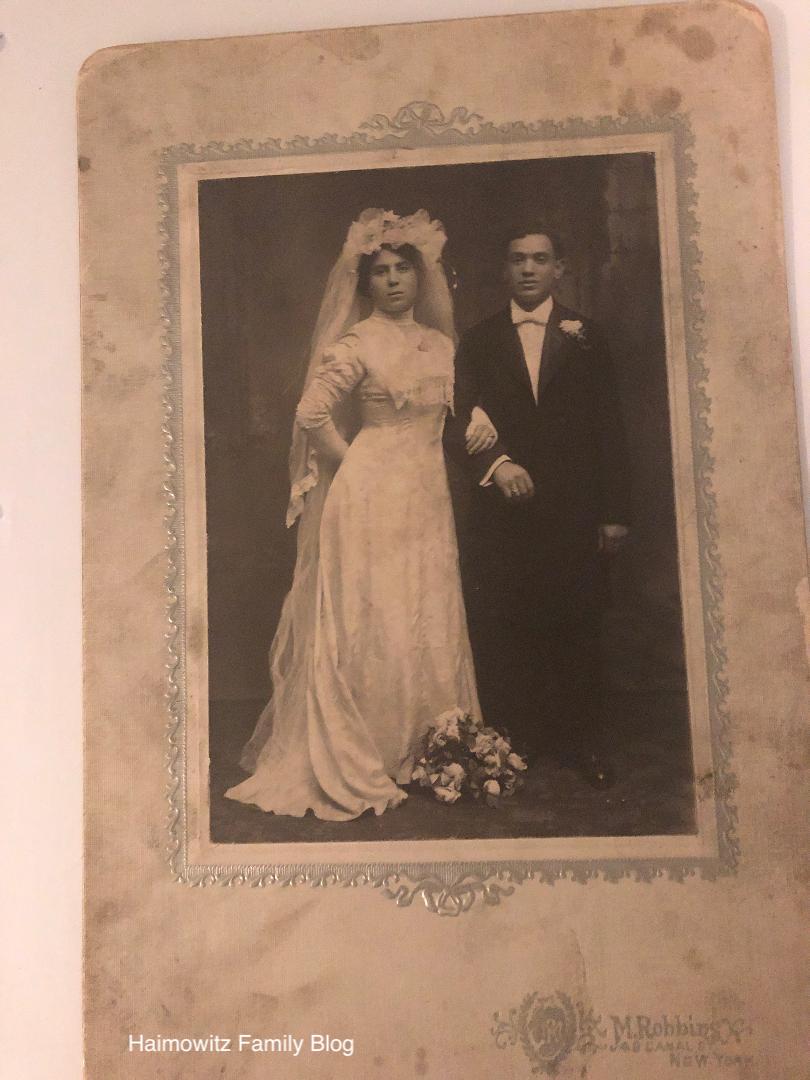 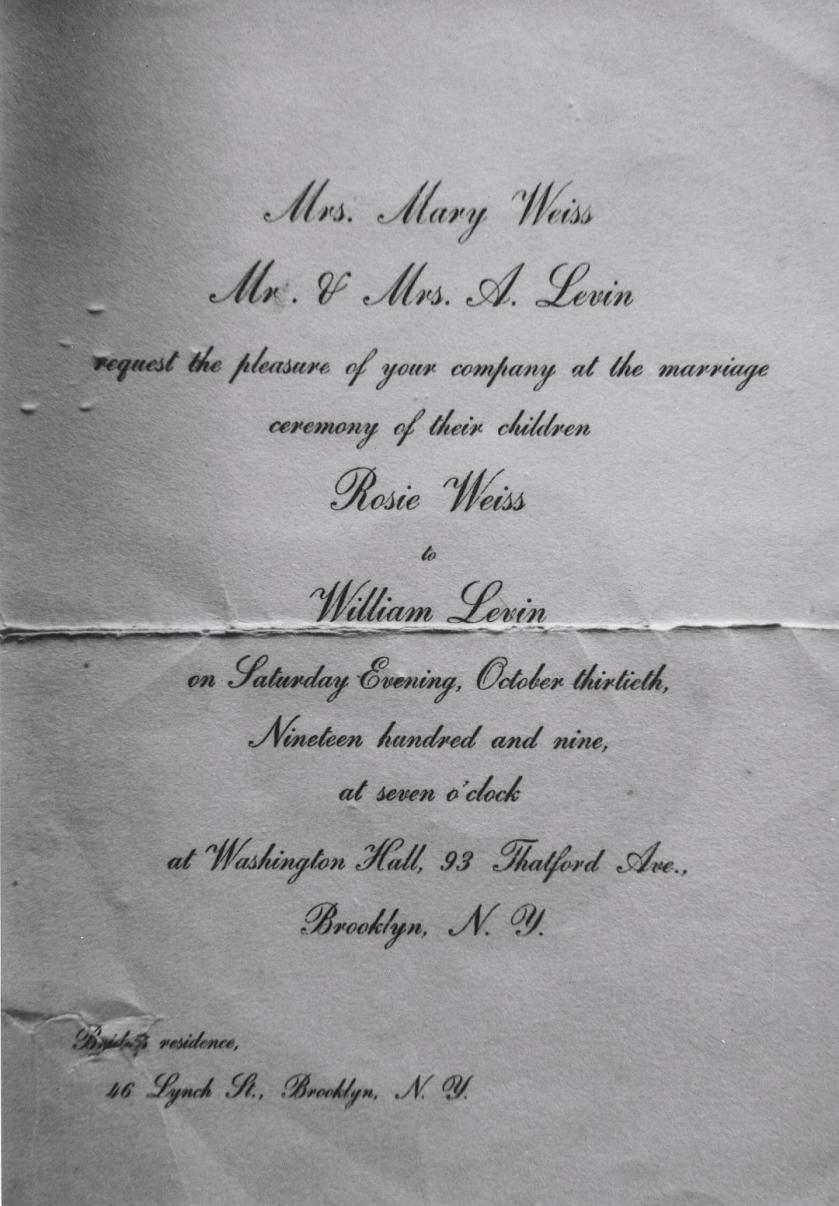 A google search for Washington Hall, 93 Thatford Ave led me to the Brooklyn Daily Eagle Almanac with a notation under Labor Unions and Organizations and under the sub heading of Textile and Clothing Trades was Washington Hall at the 93 address.

It most certainly had to have been a grand affair, with an evening wedding at 7pm, William in his top hat and tails and Rosie so beautiful in her gorgeous gown with cascading veil off of the fabulous head piece.

But more important to note is Mrs. Mary Weiss, mother of Rosie on the wedding invitation. This certainly indicates her husband Samuel Leib Weiss was deceased and that she was present in New York at the time of her daughters wedding. Family states that Rosie traveled here with her mother. I have not been able to confirm this.

A hint on the invitation was the brides address listed at 46 Lynch St. I did a quick check for the address but unfortunately the building has been torn down. If Mary was truly here perhaps Rosie was living with her mother at this address. I still have not been able to find any record for Mary/Miriam living here, nor have I been able to find where she is buried. Her death date is March 6, 1921 and in my previous post I had shared her  gravestone photo. The question as to who is standing by the grave is still in question. It was shared with us by the great granddaughter of Phillip Weiss and Sarah Meiselman. At this time the my thoughts are that this is Rosie by her mothers grave. 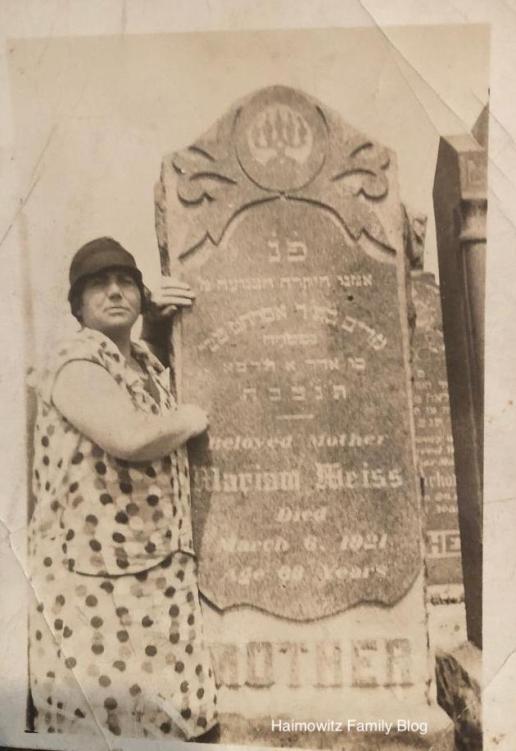 Continuing with the William and Rosie, their first home was at 61 Hopkins Street, Brooklyn, NY. The 1910 census has William (26) working as a house painter. He had arrived in 1890 and it says he was naturalized. Rosie was listed as 23, and living with them was lodger, Mamie Portland (30), working as a laundress in a laundry. Rosie’s age seems to be an error as a birth year of 1890 made her 19 when married and 20 in 1910.

On August 25, 1910 William and Rosie welcomed their first son Samuel.

I could not locate the family in the 1915 census but located William’s WWI 1918 draft registration.  William’s birth date is recorded as April 5, 1883, Rose is listed as his wife and they were living at 339 Central Ave., Brooklyn. His employer was M. Kamenstein @ 135 Pearl St. Brooklyn. Also noted on this record is that William was naturalized on his fathers papers.

A year  later in 1919 William and Rosie welcomed their second son Norman on April 20th.

Still working as a house painter, William moved his family to 2860 West Sixth Street, they were renting. Interesting on this census was that Rosie was listed as naturalized . Does this mean it was on her own account since William was on his fathers papers, as seen on the WWI document. I could not locate her naturalization record under Rose or Rosie Weiss or Levin.

I do believe I located the ‘Declaration Of Intention’ papers for William. I am not sure what to make of the fact the WWI record said he was under his fathers papers, when this appears to be his record. Lots of interesting information on this but mistakes too. The date on this 1906. His age says 21, with an 1889 birth year. If that were so, it should be 1885. The birth information conflicts with the WWI record but the fact it says his occupation was painter led me to believe this was his record. (I could be wrong) It says he was born in Minsk and last know residence was Ekateriuoslaw, Russia which today is the Ukraine. You can google this read the history. I love that this record has his signature. 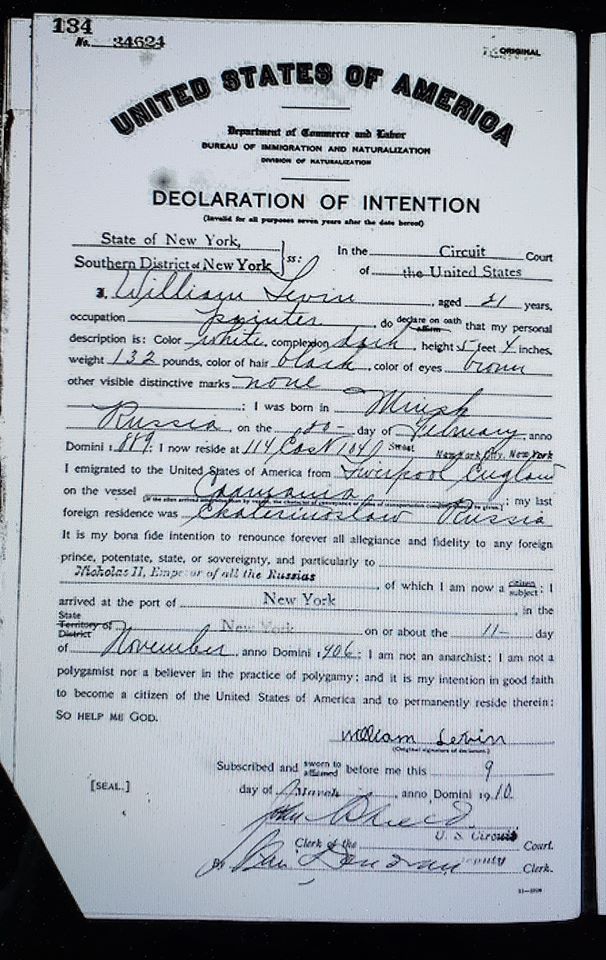 In 1922 they welcomed their 3rd and last child, a daughter named Marion/Marian and by 1925 they had moved again. Located on the 1925 census under the spelling of Levine, they were now at 2910 W. 36th St between Surf and Mermaid. William’s occupation was listed as tailor which I am sure was a mistake as the 1930 census had him as a painter again. I am sure this was the correct family as all three children were listed, Samuel, Norman and Marion. 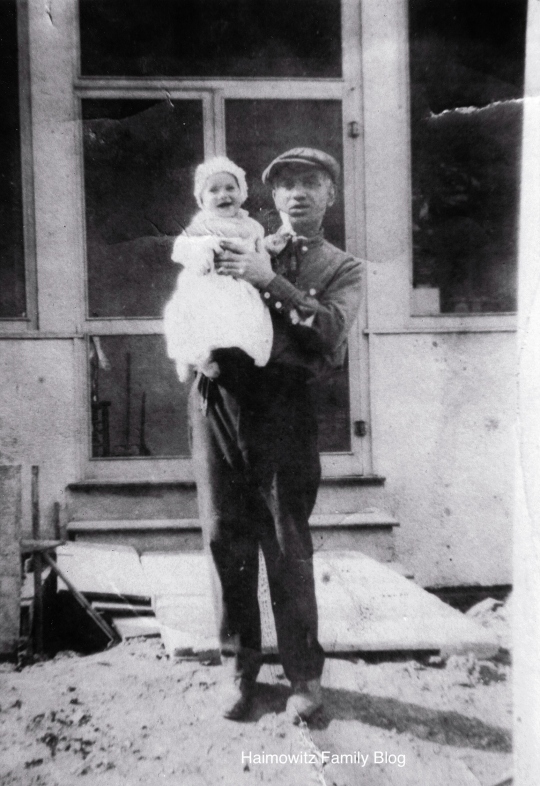 The 1930 census showed another move to 2917 W. 20th Street. (In my research I have come across many moves for families turning these early years but for some reason this time I am feeling like they really bounced around quite a bit and I can’t help but wonder why) William (44) was renting the place for $60. Under attended school, it says no and yes to able to read and write. Under language, yiddish and yes to speaking English. Under occupation it said painter but this time “own” Under Veteran it said no, so he must not have served in WWI, only registered. Samuel (20) was still at home and working as a painter with Norman (11) and Marion (7) 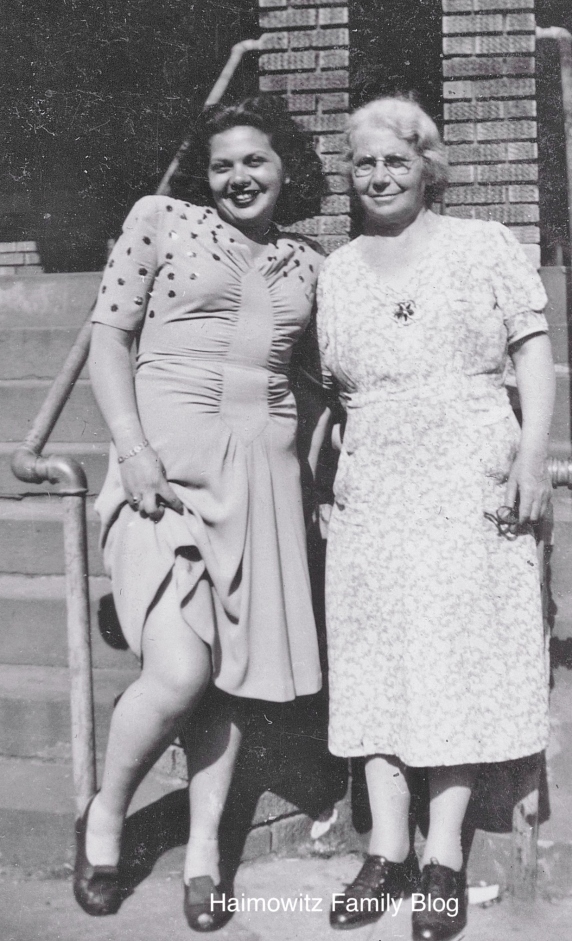 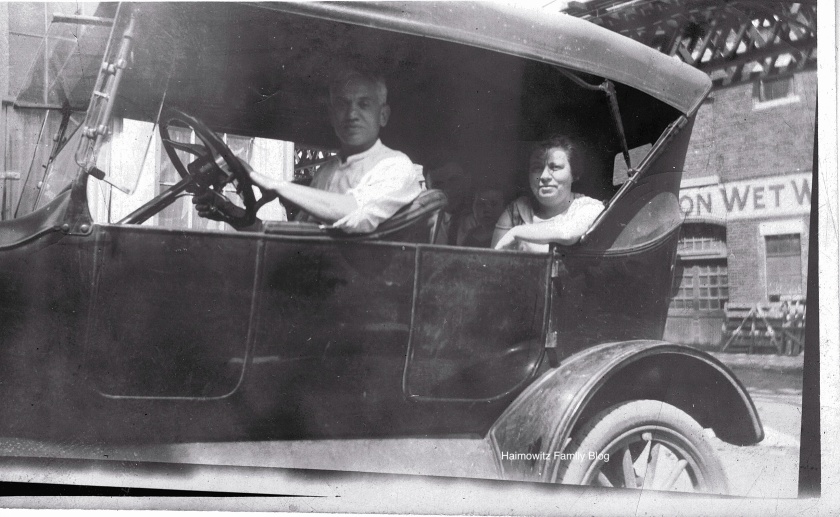 If you look very carefully into the car you will see two other people, a child in the middle with a man next to him.

William made one more move that I confirmed with the death information from familysearch.com. It lists his address at the time of death as 2824 W. 30th St. Brooklyn. 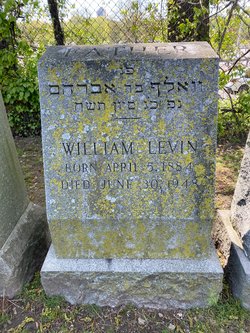 * A check for Rosie’s mother Mariam Weiss yield no record for her at Mount Hebron with her daughter and son-in-law.

Thank you to the Brian Morris and Bass families for so graciously sharing their amazing family photos.