It is impossible to begin this post without stating that with each new record found, it only added to the mystery of the story behind Moses/Moe Lifshitz.

Moses Lifshitz born 24 March 1896, New York, was my 1st c 2x removed. He was the first son born to Solomon/Simon Lifshitz and Anna Dinofsky.  (Solomon was brother to my great grandfather Benjamin Lipshitz. (the spelling on the last name was often different between many of the family members)

Moses was known as Moe as well as Morris on many records however, he had quite a few alias throughout his life time including using Morrey Lifshitz. He was incarcerated for bigamy at Dannemora Prison, New York, 1932, when he was sued for bigamy by his wife Fay alleging he had married Rebecca under the name of Joseph Schiffman. In addition to using Joseph, Moe used the aliases of

I have written about his life, his incarceration at Dannemora and Sing Sing and his marriage to Fay Parver and Rebecca Wexelman before. I had put the story of Moe to rest, that is until now.

Quite some time ago, back in 2018, a cousin, Jane, had written to me to mention a DNA match she noticed asking if I knew of the connection. I had not, but wrote to the match with the usual inquiry to a Lifshitz connection. Learning his name was Lewis, his answer was he knew of no Lifshitz in his family but if anything turned up he would be in touch. This week I received an email from him stating he believed there was a connection and that his father may be the 1/2 brother to David Lifshitz, son of Moe with Fay Parver. His father descends from Moe’s marriage to Rebecca Wexelman.

Let me explain first by sharing this article from newspaper.com The Brooklyn Daily Eagle 16 Oct 1936 – page 15 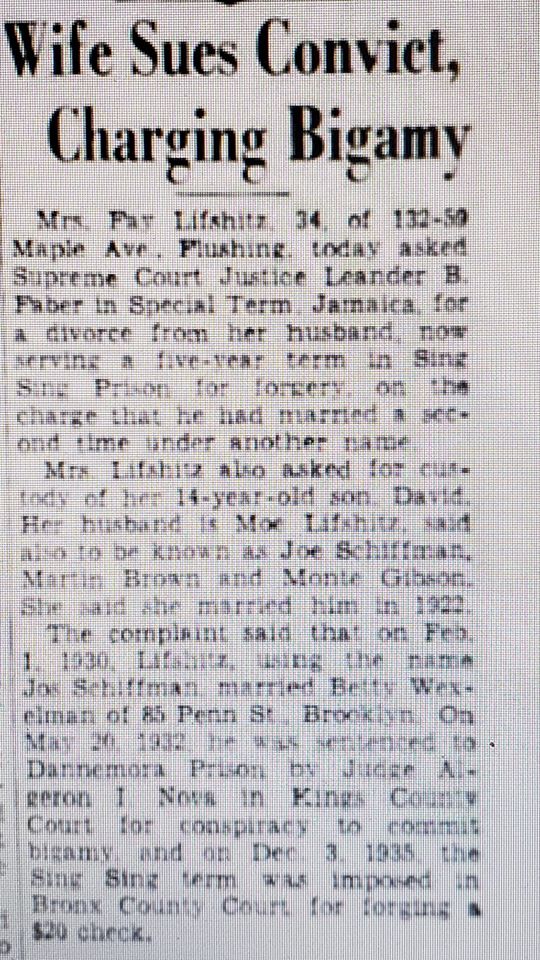 Lewis had not known that Joseph Schiffman, who married Rebecca was indeed Moe Lifshitz until Cheri ( his nephews wife) had discovered my blog post with the story of  Moe Lifshitz. As the day progressed I heard from Cheri too and also learned of Lewis’s sister Marci, also on my DNA connected radar.

In our renewed attempt to now learn the story of the possible 1/2 sibling connection between David and Lewis and Marci’s father, Martin, our trail stalled at learning that David passed away 3 June 1979. I have not been able to find any additional information on David, a marriage or offspring.

In an attempt to figure this all out Cheri shared that Rebecca (Schiffman-Lifshitz) Wexelman had been 4 months pregnant with Moe’s baby when she married him on Feb. 1st, 1930.  Her marriage null and void to Moe due to bigamy, Rebecca in 1935 married a man named Benjamin who went on to adopt their father and he took his last name.

So we had a man, convicted of bigamy, married to two different woman, having a son with each, each knowing nothing of the other it appears.

The connection was made through DNA and a newspaper article that finally figured it out.

But the story does not end there – as I continued to look for information on David and Moe I came across another marriage index record for a Moe Lifshitz, on Ancestry. This may actually be the first marriage for Moe that took place on 24 Oct, 1916 in Greenwich, Connecticut. Moe was 20, married to a woman named Lillian Aaronson, 25. (Why had they married in Ct ?)

I discovered this marriage after revisiting some of the records I already had. While looking at his WWI draft record (1917) I noticed it said he was married. His marriage to Fay had been in 1922.

First I doubled checked that the WWI record was for our Moe Lifshitz. His birth date and year matched. Checking the address it matched the 1915c and 1920c for him and his parents. The next question was is this the same Moe Lifshitz marrying a Lillian Aaronson. I knew that last name of Aaronson.

Going back to the marriage of Fay Parver to Moe Lifshitz, in Jan of 1922, there it was -Fay’s parents were Louis Parver married to a woman named Anna Aaronson. Coincidence comes to mind but the name Aaronson seemed even more familiar to me and a look at Moe’s siblings didn’t let me down.

Moe Lifshitz had a sister named Rachel/Ray Lifshitz. Rachel married a man named Samuel C. Aaronson. A look at his parents and siblings and I discovered he had a sister named Lillian Aaronson. A quick look at the 1910c listing Lillian, she was 18. Six years later getting married her age was listed 25. Depending on actual dates/months its totally in the range of being her. Moe was born in 1896, listed as 20 at the time of the marriage his age is right on. Had Moe married the sister of his sisters husband?

By 1920 Moe, (24) was back listed with his parents working as a bookkeeper with no mention of Lillian. Lillian was not listed with her parents and I could not find her under Lifshitz (all variants of the spelling) or Aaronson. However a leaf/hint on ancestry led me to an obituary for a Lillian Vainer married to a Samuel Vainer. From the obit Montreal,  Quebec, Canada. The Gazette 20 dec 2003 I learned she had 1 son Mark Vainer and 1 other son named Dov Lifshitz.

This could mean that there was possibly another  1/2 sibling out there.

The lid was off the can and even more popped out as I continued to search. Fay Parver had another sister named Molly (1898) In an attempt to try and locate possible descendants of any of Fay’s siblings that might have some information I began looking at all of them. It turned out Molly Parver married a man named Pincus Shapiro yet a son with the name of Myron Schiffman was associated with her. I have not even begun to delve into that connection, if in fact there is one.

I can’t help but think – what the heck is going on here? The important thing to keep in mind is that ‘Lifshitz, Aaronson are common names and without the proper documentation it is all still just ‘possibilities’.

Moving on to his WWII draft registration I had located the record below. I had not given it much thought when I first attached it to Moe a few years back. The birth date was his – married, unemployed but the name now meant more than before.

I found a marriage license record for a Rose Ginsberg to Moe (spelled) Lifshetz for 20 January, 1942, Brooklyn. There was no connecting information with the record. 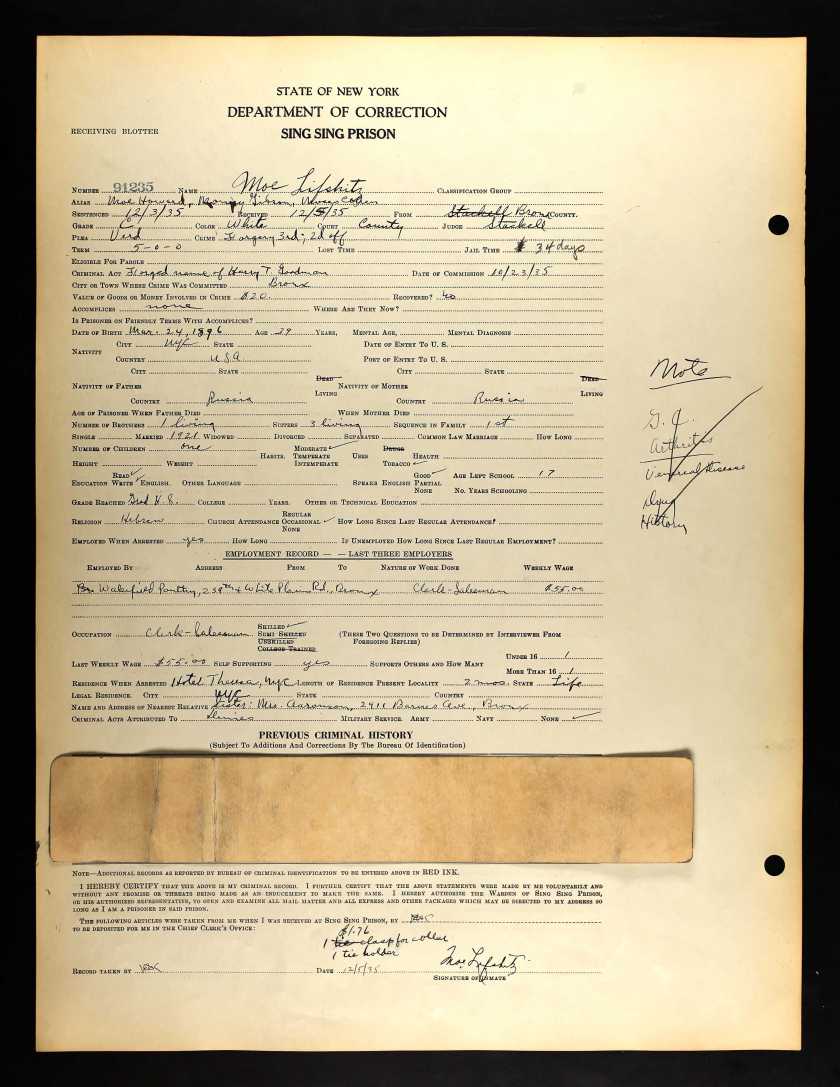 If it was him married to this Rose then something had to have happened and true to his tract record he ended up in Seagoville Federal Correctional Institution, Texas where he passed away in 1955 at age 59. It does state that he was divorced. I could find no record for a divorce from Rose.

There are still so many unanswered questions, so much let to prove. The search for answers will continue.

Switching gears slightly, I want to get back to my Lipschitz family and update with a newly received record. * My Lipschitz family/families have taken on many of the different creative spelling variants with this branch using Lifshitz.

Notice on the certificate the spelling of her mothers maiden name was written Dinowsky with most records record with an ‘f” instead.

Rachel was my 1st cousin 2x removed. She was the daughter of Solomon aka Simon Lifshitz b. Dec. 1873 Russia d. 27 Jan 1941 New York and Annie Dinofsky b. abt 1875 Russia d. date unknown.  Solomon/Simon was the brother of my great grandfather, Benjamin. They were joined by 2 other brothers, Isaac and Samuel along with 2 sisters, Fanny and Molly. Their parents were David Lipschitz and Ida/Edith Paley. The Paley connection has remained a mystery yet to be discovered. There has been a number of DNA connections of which has led to nothing concrete at this time.

While doing some searching of newspapers.com for any marriage mention for Samuel and Rae, I stumbled upon an obituary for Rachel’s brother Moses aka Moe Lifshitz. I have written about him before, however, I had not spotted his obituary. Always interesting, they provide a wealth of information to help move forward with research and this obit did not fail me.

I have seen his mother’s last name spelled Dinufsky as opposed in Dinofsky before, as well as Rachel’s birth certificates spelling of Dinowsky which I mentioned above. I had only known his sister Dorothy as Dora and learned her married name, Friend, her home in Easton, Ga., along with his brother Charles using Lipton instead of Lifshitz.

What I do find interesting in the obit was his death in Texas and the mention of his long illness. It was the omission of where he passed away that got my attention.

In a prior post, I had written about his wife, Fay Parver, who sued him for a divorce on the grounds of Bigamy. At the time Moe was serving a five-year sentence for forgery in Sing Sing Prison, 1935. This was after being sentenced in Dannemora Prison in May 1932.  She had charged that he had married a second time under the name Joe Schiffman to a woman named Betty Wexalman. I must make note that the forgery charge was for forging a check in the amount of $20.

While this was 64 years ago, in many ways it seems close in time to me and I am sure to his immediate family and those who may remember him and might find this, too. His family loved him despite his transgressions and brought him home with love and affection. This I am sure of.  Finding the obituary for Moe was a blessing for me as it closed the book on him with love and that is truly the greatest blessing of all.

Moe Lifshitz was laid to rest at

May His Memory Be a Blessing

Following a thread for information for my next Lifschitz post, I fell into a rabbit hole that landed me in the middle of a story yet to be known by our family or told. So I have taken this opportunity to shift gears and write about

Morton C. Aaronson born 16 June 1917, Bronx, New York. Morton was the son of Samuel C. Aronson and Rachel (Rae) Lipschitz. You may or more likely not, remember that Rae was the daughter of Simon Lipschitz and Annie Dinofsky – Simon was the brother of my great grandfather Benjamin Lipschitz.

At first glance under Cause of Death I spotted injuries – multiple – extreme; Aircraft accident and then adding that to the above mention of McCarren Field, which I knew as an airport, I was horrified to read further that this was a mid-air crash between a commercial plane and a Military aircraft.

Morton C. Aaronson of Encino, California lost his life at the age of 41. (although reported as 39 in the paper) Morton was the Vice President of the Esquire Shoe Company. I was able to find multiple newspaper articles from genealogybank.com in reference to this tragic United Airliner crash.  Sharing only one, below is the article from the 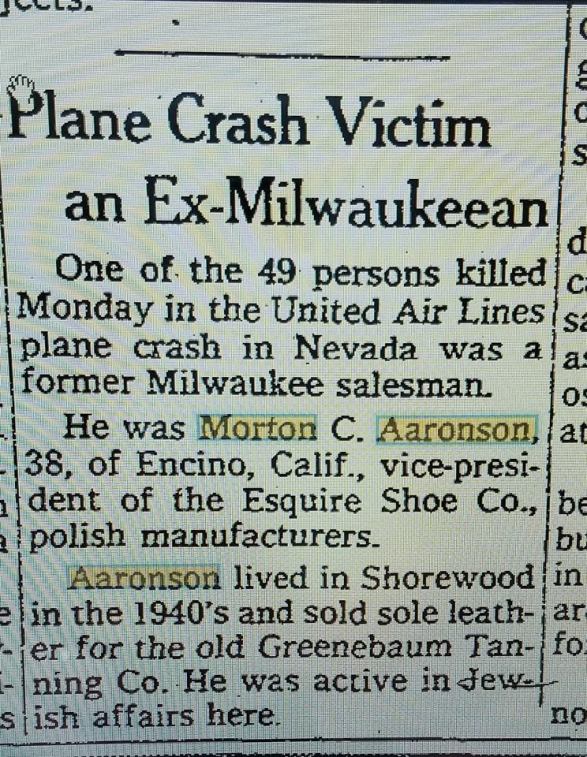 Researching Morton I have not been able to find a wife and family for him. I suspect he
may not have been married. Whether his parents or two siblings, Edith and Lawrence were still alive to witness his tragic death has not been proved. Having come from a family with multiple aunts and uncles, cousins too, I know that this tragic loss was felt by many along with a Nation that seemed to be in shock over this event. Mention of the collision was in papers across the states, stating what had happened and listing the names of all those that had been killed.
In Memory of  Morton C. Aaronson